(2) The level of the annual NO2 standard is 0.053 ppm. It is shown here in terms of ppb for the purposes of clearer comparison to the 1-hour standard level. 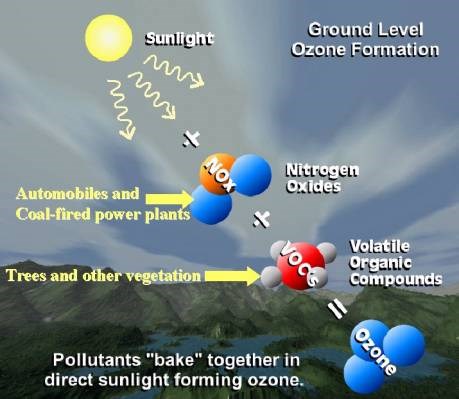 Ozone is a unique pollutant in that it is exclusively a secondary pollutant. This means that it is formed through a complex series of chemical reactions initiated by the release of a primary pollutant such as gasoline vapors. When a volatile organic compound, such as the VOC’s in gasoline vapors, reacts with nitrogen dioxide (N02) in the presence of sunlight, OZONE is formed. Therefore the level or concentration of ozone formed is influenced by many factors, including concentrations of NO2 and VOC’s in the area, the intensity of the sun and local weather conditions. Ozone is a colorless and odorless gas that can have adverse health effects.

The 1990 National Ambient Air Quality Standards (NAAQS) revisions recognized ozone as a potential health hazard and therefore set limits on the concentrations permissible in the atmosphere.

Ozone is the most prevalent chemical found in photo-chemical air pollution, or smog. Ozone is known to cause harmful effects in both newborn and unborn infants. Furthermore, ozone can be harmful on the elderly or other persons with respiratory problems. In addition, when compared to other air pollutants, ozone is found to cause the most damage to plants.

The effects of air pollution on crops, trees and other vegetation have been studied since 1970. Field studies and greenhouse experiments have shown that ozone is toxic to plants and can destroy a variety of commercial crops. Various cash crops such as oats, alfalfa, peas, and carrots are sensitive to acid rain, as are forested areas of the United States. There is also evidence that increased ultraviolet radiation caused by the loss of atmospheric ozone is affecting the normal growth cycles of plantlife.

One control strategy for ozone is to regulate sources of VOCs and nitrogen oxides. Major sources of these pollutants include the products of incomplete combustion of motor vehicle exhaust, the burning of fossil fuels, and the use of petroleum compounds and organic solvents in manufacturing and cleaning processes (i.e. one solvent used in dry cleaning is a VOC).

OZONE IN THE ATMOSPHERE

Although ozone is harmful at ground level (troposphere), it is a necessary component of the upper atmosphere (stratosphere). At this level, ozone acts to protect the layer of atmosphere which is responsible for filtering out harmful ultraviolet rays produced by the sun. So, although ozone is harmful and must be controlled in the troposphere, it is protective and must be protected in the stratosphere.

WHAT IS CARBON MONOXIDE?

The health effects of carbon monoxide depend largely on the concentration of the compound found in ambient air and the duration of exposure to the higher concentrations. CO’s effect on humans results from the effect of carbon monoxide on the supply of oxygen in the blood stream. Normally, blood cells transport oxygen throughout the body. When carbon monoxide is present, the blood cells are more attracted to CO that to oxygen, resulting in oxygen deprivation. Short term exposure of high levels of CO can cause fatigue. Long term effects may influence a persons chances of developing lung and heart disease.

Such simple steps as tuning a vehicle’s engine can influence carbon monoxide levels. Well functioning mufflers can also help in lowering CO concentrations. Carbon monoxide is especially problematic in urban areas having a large number of automobiles. This is why many government agencies require vehicle inspections on a regular basis. 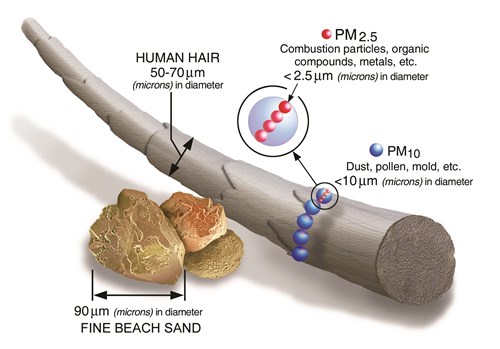 PM10 is suspended particulate matter in the air that when viewed under a microscope measures less than 10 microns in diameter. Particulate matter is formed by many processes including wind, the pollination of plants, and forest fires. The primary man-made sources of PM10 include the combustion of solid fuels such as wood and coal, agricultural activities such as fertilization and grain storage, and construction activities. PM10 was recognized as a criteria pollutant in 1987 (revised from the original total suspended particulate matter pollutant included in The Clean Air Act of 1970).

Particulate matter can have both health and welfare effects on humans. PM10 can contribute to increased respiratory illnesses such as bronchitis and can exacerbate the effects of other cardiovascular diseases. Visibility and the speed of deterioration of many man made materials can also be effected by particulate matter.

Many steps can be used to control PM10. Often businesses are required to treat gravel parking lots and alleys with chemicals designed to prevent the distribution of fugitive dust into the air. Furthermore control equipment may be required in various industries to impede the release of particulate matter produced as a by-product of their operations.

Nature and Sources of the Pollutant:

Nitrogen dioxide belongs to a family of highly reactive gases called nitrogen oxides (NOx). These gases form when fuel is burned at high temperatures, and come principally from motor vehicle exhaust and stationary sources such as electric utilities and industrial boilers.

A suffocating, brownish gas, nitrogen dioxide is a strong oxidizing agent that reacts in the air to form corrosive nitric acid, as well as toxic organic nitrates. It also plays a major role in the atmospheric reactions that produce ground-level ozone (or smog).

Health and Other Effects:

Nitrogen dioxide can irritate the lungs and lower resistance to respiratory infections such as influenza. The effects of short-term exposure are still unclear, but continued or frequent exposure to concentrations that are typically much higher than those normally found in the ambient air may cause increased incidence of acute respiratory illness in children. EPA's health-based national air quality standard for NO2 is 0.053 ppm (measured as an annual average).

Nitrogen oxides are important in forming ozone and may affect both terrestrial and aquatic ecosystems. Nitrogen oxides in the air are a potentially significant contributor to a number of environmental effects such as acid rain and eutrophication in coastal waters like the Chesapeake Bay.

Eutrophication occurs when a body of water suffers an increase in nutrients that reduce the amount of oxygen in the water, producing an environment that is destructive to fish and other animal life.

What are air toxics?

Air toxics are a group of air pollutants known or suspected to cause risk for serious health problems. Serious health effects include cancer and birth defects, as well as lung, immune system and nerve damage.

How do air toxics impact health?

Did you know?
Adults breathe an average of 3,000 gallons of air a day.

Air toxics are associated with a broad range of health effects, including cancer. Because air toxics are primarily inhaled, many adverse health effects involve the respiratory system. Some studies have linked air toxics to asthma, a widespread respiratory disease. Other respiratory effects include lung inflammation, coughing, wheezing and reduced lung function. The cardiovascular, neurological, reproductive and immunological systems can also be affected by various air toxics.

People are affected differently by exposure to air toxics. Children, the elderly, pregnant women and those with compromised immune systems or illnesses are especially susceptible.

Some air toxics are persistent and bio-accumulative, meaning they build up in the food chain and result in higher exposures with relatively lower concentrations.

WHAT IS SULFUR DIOXIDE (SO2)?
SO2 belongs to the family of sulfur oxide gases (SO2). These gases dissolve easily in water. Sulfur is prevalent in all raw materials, including crude oil, coal, and ore that contains common metals like aluminum, copper, zinc, lead, and iron. SO2 gases are formed when fuel containing sulfur, such as coal and oil, is burned, and when gasoline is extracted from oil, or metals are extracted from ore. SO2 dissolves in water vapor to form acid, and interacts with other gases and particles in the air to form sulfates and other products that can be harmful to people and their environment.

SO2 contributes to respiratory illness, particularly in children and the elderly, and aggravates existing heart and lung diseases.

SO2 contributes to the formation of acid rain, which:

SO2 contributes to the formation of atmospheric particles that cause visibility impairment, most noticeably in national parks.

SO2 CAN BE TRANSPORTED OVER LONG DISTANCES
SO2 and the pollutants formed from SO2, such as sulfate particles, can be transported over long distances and deposited far from the point of origin. This means that problems with SO2 are not confined to areas where it is emitted.

SHORT-TERM PEAK LEVELS
High levels of SO2 over a short period, such as a day, can be particularly problematic for people with asthma. EPA encourages communities to learn about the types of industries in their communities and to work with local industrial facilities to address pollution control equipment failures or process upsets that could result in peak levels of SO2.

HEALTH AND ENVIRONMENTAL IMPACTS OF SO2

SO2 causes a wide variety of health and environmental impacts because of the way it reacts with other substances in the air. Particularly sensitive groups include people with asthma who are active outdoors and children, the elderly, and people with heart or lung disease.