The land that now rests beneath the High Trestle Trails was purchased in 1881 to establish the Chicago, Milwaukee, and St. Paul Railroad Company. Union Pacific Railroad sold a 25-mile discontinued rail corridor that connects the cities of Ankeny, Sheldahl, Slater, Madrid, and Woodward to the Iowa Natural Heritage Foundation in 2005. The Foundation then transferred the corridor to nine public partners, including Polk County Conservation Board. The majority of the trail was paved in 2008. This trail segment is a major link in a proposed plan to create two 100-mile trail loops that meet near Des Moines. The western loop involves the Raccoon River Trail and Clive Greenbelt Trail. The eastern loop includes the Heart of Iowa Trail, Chichaqua Valley Trail and the Gay Lea Wilson Trail.

A former railroad bridge that spans across the Des Moines River, located between Woodward and Madrid, is the focal point of the trail. This one half mile “destination bridge” rises 13 stories high with special lighting and six overlook spots where people can step aside and enjoy the views. This trail bridge is the fifth largest in the world! 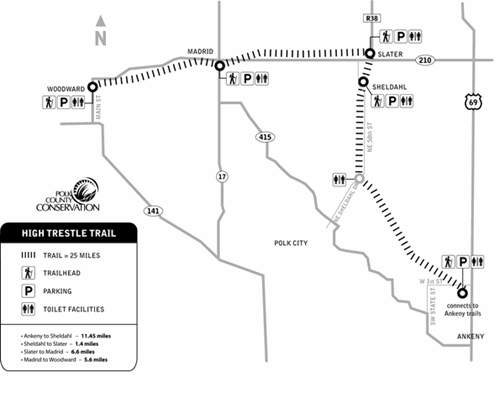 Motorized vehicles are prohibited on all trails within PCCB lands. The only exceptions are for maintenance, law enforcement, and emergency vehicles. This restriction does not apply to a manual-operated or power-driven device designed primarily for use by an individual with a mobility disability, e.g. wheel chair.