As the name implies, 150-foot high “yellow banks tower above the Des Moines River in this southeast Polk County park. Native American artifacts have been found in the park, along with a burial mound. This 576-acre park awards its visitors with a medley of recreational opportunities such as camping, picnicking and picnic shelters, hiking, play-grounds, fishing, ball fields, and two boat ramps for both pond and river access. Migrating hawks and bald eagles are often spotted along this wild stretch of river. Don’t forget to hike the Savanna Trail and marvel at a rare oak savanna woodland.

Reservations for the Modern Rental Cabin and some campsites can be made on-line at www.mycountyparks.com. Prices can be found here. Online reservations are available for camping between April 1 - November 30.

Reservations for the Modern Rental Cabin and some campsites can be made on-line at www.mycountyparks.com. Prices can be found here. Online reservations are available for camping between April 1 - November 30.

Named by the yellowish-colored bluffs that border the park, Yellow Banks Park is great for hiking, wildlife viewing, camping, and relaxing. Glaciers formed the beautifully scenic bluffs that overlook the Des Moines River long ago during the last Ice Age. This nearly 600-acre park has offered breathtaking views and important resources for years. Yellow Banks Park was acquired by Polk County Conservation in 1980, but its history does not start there.

For thousands of years, this favorable spot was home to many different groups of people. This is supported by archeological evidence in the form of stone and ceramic artifacts that have been found in this area. Over the past 30 years over 600 artifacts have been donated to Polk County Conservation from families and individuals. Artifacts include a wide variety of projectile points, axes, celts, mauls, pottery sherds, grinding slabs, and a rare banner stone. The artifacts represent four distinct indigenous cultures spanning over 13,000 years of human inhabitance in the area.

People during the Paleoindian period were the first to inhabit this area about 13,500 years ago. They lived in small bands and hunted now extinct species of bison, mammoths, and mastodons. Some of the artifacts from this period include leaf-shaped spear points, stone knives, and hide scrapers. These tools were used for hunting, butchering game, and dressing hides.

Around 10,000 years ago, the Paleoindian period began transitioning into the Archaic period. People from this period were hunters and gatherers. They hunted modern species including bison and deer and collected a variety of plant foods such as hickory nuts and hackberries. Stone axes were made for cutting trees and doing woodworking. The atlatl, a long hooked stick which allowed hunters to throw spears farther with greater impact, was commonly used during this period. Two rare artifacts from this time period include an atlatl weight called a butterfly banner stone and an impressive large 3/4 grooved axe.

The Archaic time period eventually gave way to the Woodland period beginning 3,000 years ago. During this period, people began domesticating a variety of native plants and growing them in small gardens. They also continued to gather wild plant food. Bows and arrows with one-inch points were used for hunting as well as spears. Another innovation first appearing during this period was pottery. The clay used to construct the pots had grit or sand added as a tempering agent. The outside of the pots were often decorated with cord markings. Burial mounds are also associated with the Woodland period. These large earthworks were usually built on a bluff top overlooking a river. The mounds were often circular or conical in shape. Human remains, stone tools, and pottery were often placed in the mounds.

Beginning 1,000 years ago, people during this period spent their time hunting, fishing, collecting plants, and planting large fields of corn, beans, squash, sunflowers, and other crops. They lived in villages of bark-covered longhouses located along major rivers. Distinct cultural and diagnostic artifacts like shell-tempered pottery are associated during this period.

Occupation by people during the early historic period is also represented in the collection. Sherds of crockery, glass, porcelain, iron hinges, a musket ball maker, clay marbles, buttons, buckles, and clasps are just a few of the artifacts representing this time period. The age of these items range from the 1850s to the early 1900s.

Today, the park still captivates visitors with its natural beauty and fascinating history, showing that Yellow Banks Park truly is one of a kind. 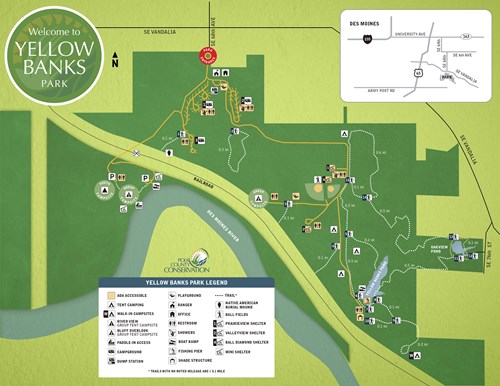